What Is Budder Cannabis Concentrate? Your Complete Guide 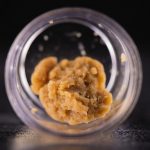 Interested in concentrates, but curious about what budder weed is? Then keep on reading!

Budder weed or wax are the terms used for most creamy cannabis concentrates available on the market today.

Budder has a unique consistency

Narrowing down the consistency of budder is where things tend to get a little bit different. Budder is somewhere in the grey area of concentrate consistencies. It isn’t hard like shatter is, and it’s not liquid like a runny wax. Budder is somewhere in the middle depending on how it was manufactured. Normally, budder is made by dousing cannabis in CO2, butane, or another variety of solvent and then purging out so that only the cannabis extract remains.

When dabbing enthusiasts talk about ‘budder weed,’ they are normally referring to any cannabis concentrate with that creamy consistency. Many people often confuse budder with another popular cannabis concentrate, crumble. They both lie in that ‘a grey area’ between shatter and an oil. There is a simple way to distinguish the two. Crumble, as the name suggests is crumbly like a dry cheese. Budder is much moister and is easier to scoop making it more popular among dabbers. Budder normally has a stronger smell when compared to many crumbles, but different strains can also have different aromas. The reasons wax concentrate can vary from crumble to budder is due to a number of reasons like extraction method, temperature, pressure, strain and solvent used.

Related: If you’re interested in learning more about dabbing and dabbing torches, but don’t know which dabbing torch would be most suited to you,  then check out our article on Top 5 Absolute Best Dab Torches.

Wax can hover somewhere between budder and crumble depending on several different variables. There are several different factors which can influence the outcome of cannabis wax such as pressure, the strain of cannabis, solvents, and temperature. An example of the difference between solvents is that when you utilize propane rather than butane, the concentrate will be more likely to have a buddery consistency rather than crumbly.While using a butane solvent will normally result in cannabis concentrates with a dry crumbly product. Shatter on the other hand is a lot more brittle than budder weed, although shatter is a lot more popular on the market due to its looks and ease of use with vaporizing.

While budder is just another of the many different forms which cannabis concentrates that can be found; it should be noted that generally shatter does not have as much flavor as budder concentrates. This is because generally, budder contains more terpenes.

Why the industry loves budder wax

As dabbing grows in popularity, so do the attitudes towards different concentrates. Early in the cannabis concentrate boom, many dabbers were raging about the benefits of high-cannabinoid concentrates such as shatter. Popularity has swung in a new direction lately. Now, concentrates like sauce with moister consistency and strong aromas seem to be leading the concentrate popularity race.

The majority of cannabis culture is moving towards concentrates with higher flavours and potency. Budder is, for this reason, a popular choice on the marijuana market as its also easy to scoop and serve. Unlike shatter where you could lose a few broken pieces here and there if you do not use the right tools.

For those that find it hard to make tough decisions like shatter or sauce, then budder offers a safe place somewhere in the middle. It’s a perfect middle ground is budder weed and therefore the added benefits of the aromatic and flavorsome terpenes. With scientific data leaning towards the benefits of the “entourage effect” of cannabinoids and terpenes working in symbioses for their therapeutic properties. Many agree budder is a better all-rounder when it comes to ease of use, potency, aroma and flavor.

Budder wax is also easier to handle and deliver in specific dosages for patients. Whether you are dabbing, vaporizing of packing a blob in the bottom of a bowl reading to start combustion, budder weed will get you consistently baked and absorbing the full profile of cannabinoids and terpenes.

With the demand for high quality concentrates on the increase for both consumers and medical patients alike, when it comes to price, availability and value budder weed is the most likely choice. Many dabbers believe that budder is the perfect cannabis concentrates for beginners. So, if you’re new to dabbing, it’s worth giving budder a strong hard look.

If you’re interested in dabbing tools, feel free to check out our full range of premium dabbing tool reviews.

If you have any questions, don’t hesitate to contact us and comment below. We love hearing feedback from our readers, and our professional team is always happy to help!