Blunt vs Joint vs Spliff — Differences, Pros, and Cons 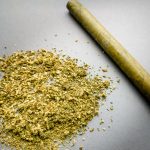 You’re standing around with some friends, toking up together to get ready for a night out. They pass you the marijuana and you make a comment about how well the blunt is rolled.

The rest of the group stifles laughter. “Uh, that’s a joint,” your buddy says. Your cheeks turn red– this isn’t the first time you’ve embarrassed yourself with your lack of terminology know-how.

Don’t get caught again now knowing what you’re smoking. If you’re finally ready to learn the differences between a blunt vs joint vs spliff, keep reading.

While joints vs blunts are both excellent ways to toke up if you’re not a bong user, they do have their differences.

First of all, what is a blunt? To put it simply, a blunt is 100% marijuana wrapped in a cigar wrapper.

To roll a blunt, you’ll first need to purchase an inexpensive cigar from a gas station or smoke shop. Dutch is a popular brand– it’s the kind that’s referenced in the popular song “Pass the Dutchie” by Musical Youth.

The tobacco is then emptied from the cigar to be filled with marijuana. Voila– you’ve got a blunt.

These are favorites for those who aren’t very skilled at rolling their own smokes.

A joint, sometimes called a “marijuana cigarette,” is 100% marijuana rolled in cigarette rolling paper. Rolling papers can be purchased from smoke shops and some convenience stores.

Joints also usually contain what’s called a “crutch.” It’s a bit of rolling paper rolled into the joint to act as a filter for the smoker. The crutch provides stability for the joint and also keeps the smoker from burning their hands as the joint burns closer.

How Is a Spliff Different?

While a spliff might appear similar to a joint, there’s one major difference: the addition of tobacco. Spliffs are rolled with cigarette paper, but tobacco is added to enhance the effect of the marijuana. Some smokers add tobacco to make their marijuana last longer, too.

Right off the bat, the tobacco provides an instant head and body high. Some smokers like to feel like their smoke right away, and marijuana can take a few minutes to kick in. Those who smoke cigarettes regularly also appreciate the dose of nicotine.

Europeans prefer to smoke a spliff vs joint, whereas Americans prize joints. Americans are actually twelve times less likely to smoke a spliff over a joint than other leading spliff-smoking countries. This is likely due to how negatively the effects of tobacco are portrayed in American media.

It’s also interesting to note that in Europe, the names “joint” and “spliff” are switched, since the word “joint” usually means two things (marijuana and tobacco).

Which is Your Favorite: Joint Vs Blunt Vs Spliff?

Now that you’ve brushed up on the key difference between a blunt vs joint vs spliff, which do you prefer?

If your answer is “none,” you might want to look into dabbing. It can be up to four times as strong as these typical methods, and a lot cleaner. Check out our ultimate beginner’s guide to get started!